Album Review: Dimetrodon by The Doubleclicks 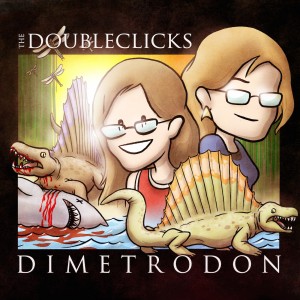 Originally posted over at wordofthenerdonline.com

The Doubleclicks have a new album out, called Dimetrodon, and I was lucky enough to get a press preview to review. I have to say this band is definitely one of my favorites right now and I can’t help but smile when I listen to their music. They are a duo, two sisters out of Portland Oregon, who write and sing about wonderful geeky things. Their music is mainly geared towards empowering geeky girls, but I think it serves to empower all geeks. Most of their songs are about being confident with who you are and not letting people put you down. And the rest are fun little songs about cats or dinosaurs.

The album opens with Cats and Netflix, which is about staying inside and enjoying Netflix in the cold fall/winter time of the year. And I can really relate to it, and think a lot of other people can as well. Being a Canadian I often dream of hibernating inside all winter and watching Netflix all day long. It’s a good intro to the album and an intro for people who may not be familiar with their music. It also features their infamous cat keyboard.

Up next is my favorite song on the album, Unstoppable Force. At first you may think it’s about trains and math, but it has a hidden meaning of doing something with your life and taking chances; and not being held back by someone who doesn’t want to make an effort and try things. It’s actually a real feel-good song and inspiring.

And then we get to the title track of the album, Dimetrodon. It’s about using the thought of dinosaurs to help get through your problems and inspire you to not be afraid to be who you are, even if it’s something big and scary with pointy teeth. Or just a human who may need a little motivation to deal with society and not fitting in very well.

Ennui (On We Go) is about dealing with social situations that you really don’t want to be a part of, for the sake of being social. I think a lot of people can relate to this as well, trying to keep up with friends who party a lot and really just wanting to stay home and do nothing. And if you can’t relate that much to the subject matter, it’s a great song with wonderful music in it.

The next song, Where Did You Go, is from the view of a dog who misses its human when they leave. It’s cute and funny and not expected. And after that is Wonder which is a sneaky song about Wonder Woman. It doesn’t outright say her name, but it has a lot of imagery about her, and is another one of their inspiring songs; it is like a little treat for geeks who pick up on the lyrics.

Internet Troll is a great song for anyone who has spent time on the Internet (which is pretty much all of us), especially any place that someone can leave feedback. Whether it’s forums or Youtube comments, the majority of us have seen the trolls, and always wanted to say a lot of the things in these lyrics such as, “If you don’t enjoy a Youtube video, you can stop it, you don’t have to watch it.” It’s a funny song that should be dedicated to quite a few of the commenters on Youtube.

Working For Me is another song calling out jerks. But this time it’s not Internet trolls, but the boys who think that playing a guitar makes them special and how they use it to get girls. There are many girls out there sadly who fall for these boys, the ones that use it as a way to get and keep girls, not the ones with actual talent who did it for the love of being a musician. It’s about time someone finally called them out on it.

After that we have Tabletop (featuring Adam Warrock) which is about The Doubleclicks being asked to be on the Internet famous show Tabletop hosted by Wil Wheaton, which is a show about playing tabletop games. It’s a song about them getting prepared to be on the show and features fellow geek artist Adam Warrock.

Godzilla isn’t what you would expect it to be about. It’s not about Godzilla exactly. It’s about someone breaking your heart and comparing that to being Japanese and that person being Godzilla, basically stomping on it. It’s a great metaphor.

And Love You Like A Burrito is at the opposite end of the love spectrum from Godzilla, and about loving someone. Loving them so much you relate it to loving a burrito, which to very many people is quite a lot. Again they nail it with the great metaphors.

After that we get two live songs. Will They Or Won’t They is about two people being together and how they compare to several other geek couples, and is another treat for all the uber geeks out there, who get all the references. And Clever Girl isn’t about a girl per say, it’s actually about a Velociraptor, but also about being who you are and how that’s good enough.

Overall it’s a great, fun little album and exactly what I would expect from The Doubleclicks. Something geeky yet inspiring and I feel everyone should check it out and support them.

And head on over to their website thedoubleclicks.com where you can find links to all their fun stuff.