Interview with a Podcaster – Unusual Suspects 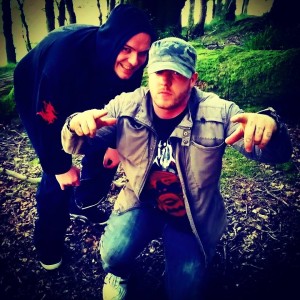 Did an email interview with my Scottish Podcast bros (although only Sean answered the questions, leaving us to believe Bauldy was hiding in the shadows somewhere), Unusual Suspects. Enjoy their insanity.

Well, the podcast is essentially the ramblings of two Scottish lads with a love of pop-culture and rippin’ the shit out of twats who deserve it.  We’re no different than the usual chat you would have with your friends, ‘cept we have the balls to record it and upload it to cyberspace, knowing full-well about four people will listen to it.  Two of them being us.
It consists of me, ‘The Supreme Being’ and my co-host, the man with the golden voice, the man who makes MEN wet, the inimitable ‘Voice’. We’re kind-of the Kings of Rothesay, on the Isle of Bute. Everyone knows The Voice, they bow down before him and ask his sage-like advice for ALL issues.  Fungal infections, STDs and old cheat codes for the Mega Drive are the most common.  I keep the local merchant in business with my insatiable lust for Haribo.

2) What made you want to start doing a podcast? Were you approached or did you start on your own?

Speaking personally, I had started doing radio shows at our local station for about a year or so.  I enjoyed the interaction with guests and listeners, talking shit in a strange back-and-forth via e-mails/texts and speaking my replies to them, with playing tunes being thrown in, creating the perfect storm.  I had enjoyed a few podcasts for years, the SModco family and Marc Maron being very influential in creating our own – I quickly established we were not psuedo-intellectuals like Maron or anywhere near as funny as TESD. Also, we say ‘cunt’ a lot.  I knew I had to get Bauldy and the Emo-Hobbit on it as their unique brand of apathy and comedic sensibilities were exactly what I wanted to enrage some and have others pissing themselves laughing.

In summation, I wanted to talk and force others to listen and The Voice was approached and granted me my request.

The most…. well it’s nice getting good feedback that someone somewhere found you funny I guess?  To be honest, I can’t say that I care either way, Bauldy cares even less, I’m sure! We don’t have ‘personas’ or whatever, we are the same off-mic as on, so there’s really no difference…. Let’s leave it at good feedback then!

The least is the laborious and baw-bustingly mundane task of editing the fucker.  Honestly could fire the laptop out the window at a pensioner half the time, fucking SUCKS. That said, I think the ‘Suspects needs editing and the sound effects add to the shite humour, would be weird without it….

4) How do you encourage feedback/interaction (or do you) with your listeners?

I suppose we do, owing to the Facebook and Twitter pages.  That said, we have no interest in chasing people to listen to the podcasts or engage with us.  If someone chooses to, we’ll welcome them of course, but I see people striving constantly for some glance of recognition and I’m just like “Simmer doon, ya tosspot, yer pod is PISH anyways!” – Jokes aside, we are just happy with what it is, no pretense, no over-inflated sense of our worth.  Also, The Voice likes tits.

5) Do you listen to any other podcasts?

I listen to ‘Tell ‘Em Steve-Dave’ pretty religiously.  Initially, I enjoyed the fact that Bryan Johnson was on the dole, mopey as fuck and couldn’t arsed with anyone.  I guess I could relate.  Still can to be fair.  Marc Maron is a fantastic stand-up, his podcast, ‘WTF with Marc Maron’ has re-ignited his career and is really the only reason I know of him.  He’s smart, neurotic and has an intimidating vocabulary, thoroughly recommend him.  Of course Little Geek Lost too, eh?
As far as I’m aware, Bauldy doesn’t listen to many podcasts, if any at all.  The fucker is out whackin’ cunts for the FBI, can you imagine Mulder with an I-Pod? C’mon, son.

6) Biggest piece of advice for someone looking to start a podcast?

Go eat your own shit and get a life, you pathetic fuck!

7) If you could only listen to 1 CD/album for the rest of your life what would it be and why?

I could choose, but in all reality my CD player would probably stop working eight seconds into track one.