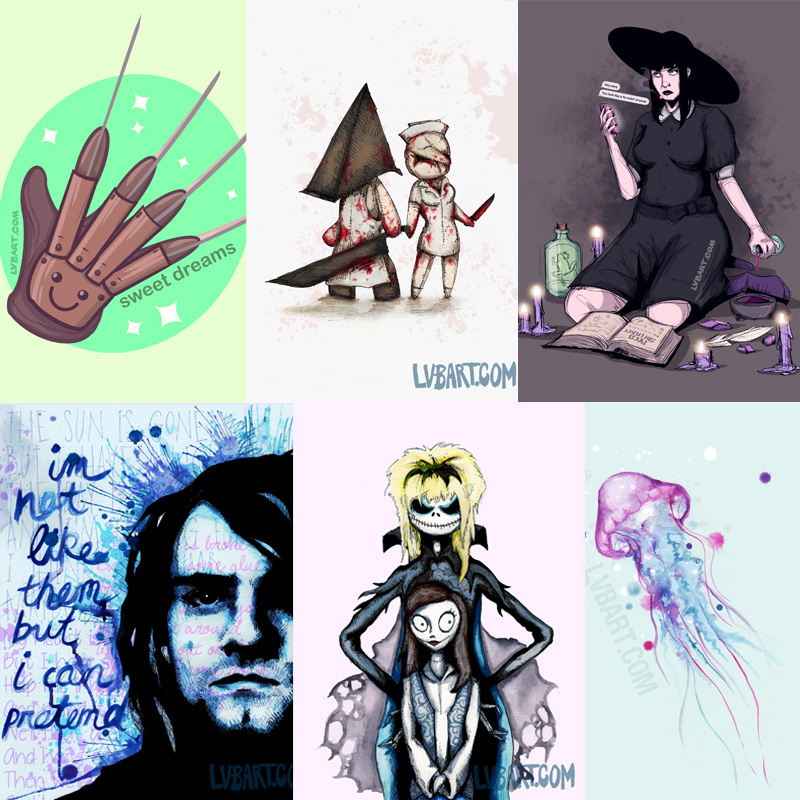 Justin McCafferty aka Ludwig Van Bacon is an artist from Atlanta Georgia. I’ve been following his work for awhile, and thought it’d be interesting to interview him. You can find his work at lvbart.com

1) How did you get started in making art? Were you an artist as a kid?

I’ve been drawing as far back as I can remember. There were a few years when I hardly ever picked up a pencil, I believe those were called ‘teenage years’ because literally nothing was cool. I used to love drawing superheros, I would read comics all the time and try and recreate my favorite images.

2) How did you decide to make pop culture art and how did you go about developing your own unique style?

I think pop culture is a great way to inject instant emotional attachment into a piece. If you see a character from your childhood, it immediately transports you to a time or connects you to a memory back then. Most of my styles (as varied as they are) are born out of necessity. Plushies came from me not liking to draw hands or pupils, the scribbly digital art was me sick of having to sketch out my drawing first and then drawing over it. I just said ‘fuck it’,I’ll sketch on the final drawing while doing the pen work.

3) When do you find yourself at your most creative?

I almost exclusively work at night. I find the daytime to be distracting, I’m usually busy being a parent and doing housework and other chores during the day. Once the sun goes down and everyone is asleep, I can really focus on my art and have my brain stay in once place without social media notifications or the washer ‘ding’ when the clothes are dry.

4) Have any celebrities you have done art of ever commented on your art?

I’ve had a few people re-post artwork and I’ll stumble upon it. Some pieces get screenshot and passed around so much, there’s no connection to me anymore. Bruce Campbell posted some of my art, Rob Zombie has a piece on his Facebook, Christine McConnell has purchased several shirts from me. I recently was commissioned to do a piece for the entire sound and voice cast of the new Dark Crystal series.

5) Do you have a set schedule to drive yourself to create pieces, or do you just do them as you are inspired?

Generally, if I get an idea for something, I’ll look up a picture that will connect the piece to my brain. So, if I wanted to do a witch cat, for example, I’d look up and save a picture of a witch and a cat. Everything goes in a Dropbox folder that I have access to on all my devices. I start shipping, posting on various websites, answering messages, and other office work around 8/9pm depending on if my son is home. I’ll work on the ideas in my Dropbox around 3 or 4am, and also commission art. I’ll usually get about 2 final pieces done and am asleep around 7am.

6) Have you even gotten negative feedback for any of your work?

There’s always people out there that ‘don’t get it’, which I expect. It’s not for everyone. Every once and awhile my family has to have a discussion with me about their dissatisfaction with a piece. Plushies don’t have pupils, feet, or hands, which can be off-putting. It usually happens when people make sense of things that are non-nonsensical. I have a ‘Daddy Shark’ piece where a male and female shark engaged in BDSM, and one commentor decided this was their chance to go in detail about the mating rituals of sharks and that females are much larger than males. Thanks, scientist.

7) What are some of your fave pieces or pop culture references to do?

Easily the most popular and my favorite to do is Labyrinth. Androgynous males are always fun, but can be challenging to get their feminine features correct without them looking like woman. The Office is my favorite show and I really enjoy doing obscure references that only hardcore Office fans will understand.

8) Do you ever just make art just for yourself?

It’s been a long time, I think the last time I did something ‘for me’ was a big pencil/pen drawing of Groot while I did an art show. Of course, I ended up selling it, so I’m not sure how ‘for me’ it actually was in the end. I like to do drawings for my son, and my family usually ends up guilting me into doing things for them, so I’ll put that in the ‘for me’ category.

9) Not going into specifics,have you ever gotten strange commission requests?

I decided to make a handful of naked Bitmojis for myself on Snapchat a few months ago. After people started asking for their own, I decided to take commissions for them. This lead to being sent many nude photos from women and men, mind you, I’m not complaining. I just found it unnecessary since tiny cartoon nipples probably aren’t going to reflect how your actual nipples look in real life. Also, I put a twelve year old’s head on the body of Fabio one time.

10) Anything you find hard to draw?

I can’t stand drawing symmetrical things. Buildings, cars, guns…anything that requires a straight line. One of the reasons I used to love drawing Batman as A kid was that you could hide his hands and feet with a cape and also he didn’t have pupils. As long as he’s not in the Bat-mobile, I’m good. Just because of my personal interests, I’m not a fan of anything political or sports related. Thankfully no one has ever commissioned either of those things, I think they get it (don’t get any idea, everyone).

Also, I saw a really great witchy art piece he did, and decided to cosplay as it.