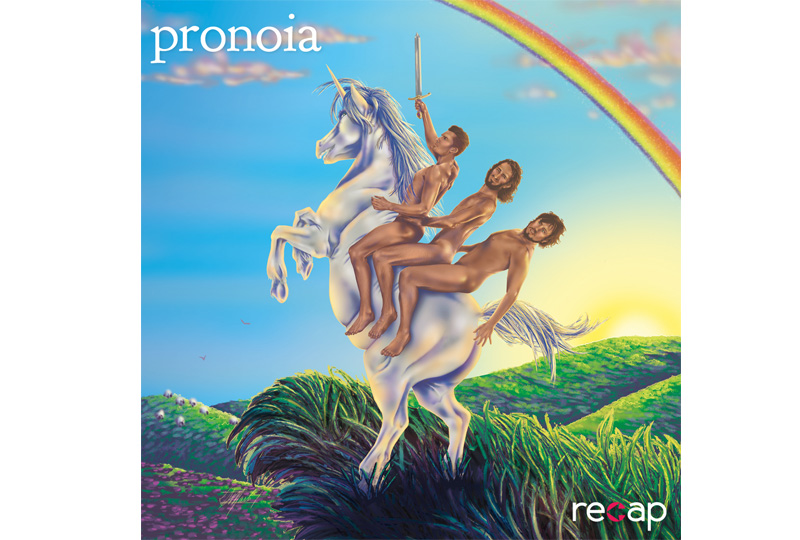 You should know by now I’m a big fan of the band Recap. They released their 2nd album recently, Pronoia, which I love. It’s a different feel than Neon Milk, but the same Recap at the heart of it. The songs are more personal, and also feel like they were meant to come off that way. The album is mostly upbeat songs I find, and even if some are a little more dark, I still feel like the soul of the songs really shine through. And of course the quirky factor is there, which I love.

As usual, I wanted to get in an interview in with the band about the album Pronoia. And while they weren’t able to be on my podcast, they were kind enough to do an email interview, so here are those questions and answers.

1) With Pronoia being your second album, did you feel more experienced and comfortable recording it, or was it still hectic?

Like any art worth doing, there was still lots of highs and lows for sure. There was a sense of trust and confidence musically that wasn’t there before, but there were more creative challenges having a more general theme this time around. We barely met some deadlines waiting for the right emotional space to bring out the right melodies and lyrics. Pretending to be aliens is easy, but being yourself and communicating that realness in song can be super humbling experience.

2) Hello Ego is a great song, especially lyrically, and I for one can relate to it personally. Was it written from personal experience (you don’t have to get into it) or more generalized?

Thank you! It’s one of our favorites. Hello Ego was not necessarily about one person in particular, but more like a characterization of all the people who have played that role. We all had our various *cough* inspirations.

Mission accomplished! Yes, absolutely this was a more personal album. We tend to be positive people at heart… it took a long time to get there and we found it’s helped us tremendously. We really wanted to capture that flip from paranoia/resistance to flow and positivity we’ve all been through. It’s a process we feel everyone goes through at more than one point in their life, and the two-sides (dark/light) of Pronoia was meant to guide that transition and make joy easier to choose.

4) I love that the “quirk” factor and geek references are still in your songs. Is that something you intend to keep?

Oh yes that’s unavoidable, it’s who we are! Our geek side is always destined to make an appearance in whatever we do.

5) Gotta ask, are there video plans?

Yes there are currently 2 videos in the works that will be released early 2017. That’s all we can say for now 😉

6) Would you ever write a power ballad?

Recap has no single genre, so we’d say it’s just a matter of time until we put our twist on one!

7) Neon Milk was green, Pronoia is pink, do you plan to keep with an album colour?

Theme is very important to us. It gives focus, and really helps give creativity a space to explore itself. Neon Milk set the precedent of having a dominating color (given it’s a tangible object), and we almost unconsciously followed that rule again with Pronoia. It would have felt empty without one! So unless we run out of colors, it’s something we’d love to keep with.

8) If you could record music for a video game, which would it be and why?

Man… tough question. We were already lucky enough to compose music for Shroud of the Avatar, but would love to do more. I think it’s easy to say that the Mario and Zelda titles have some of the best tunes in gaming history. They’re so damn infectious, upbeat, and entrancing. We’d be terrified however to live up to that quality. Maybe someday we’ll just have to make our own games! 😉

So I would encourage everyone to go to https://www.recapband.com to get the album. Listen to it on repeat daily. Support this great band! DO IT! DO IT NOW!