originally posted over at wordofthenerdonline.com

Unidentified Funk Object are a nerdy funk band from Halifax, Nova Scotia. Bringing something new to the geek music genre, they decided to go with funk music instead of the usual pop or rap that we have become accustom to as far as geek music goes. 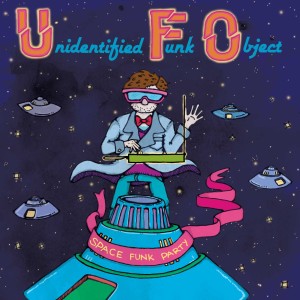 And I was lucky to be asked to review their album Space Funk Party. It’s a 10 track funk fest. It’s certainly different from the music I normally listen to, but in a good way. I am always open to new music and genres and love discovering indie bands, and this is one band that I am so glad to have found out about. Their combination of funk and space themes may seem a little odd, but once you listen to the songs, they totally fit together and flow very well.

There is almost a retro vibe to the album, but that may be the funk style to it. Especially the song Orbits has the feel of possibly an old disco or club song from the 70s and it’s a great song. It follows nicely behind the title track Space Funk Party which has a great happy vibe to it. Like an actual party song. And of course you have the typical album slow song Zero Gravity which still has the deep bass of the other tracks but is just sort of slowed down.

And Science of Love has almost an Abba-esque riff in it, and almost sounds similar to them, but it’s another fun boppy song that makes you just want to dance around. With the deep bass and fun upbeat vibe of the whole album, it really just made me want to dance, even if it was just in my car while driving. I can car dance with the best of them.

Overall the album is really great sounding. It’s on a different track then the usual geek music we are hearing, but it’s a good one. It’s sci-fi and funk, what more could a geek ask for? And even if you are unsure or weary because of the funk classification, just take a chance. It’s a great way to get into a different genre of music and I would wholeheartedly recommend this album to anyone.

Check out Unidentified Funk Object on their Bandcamp page and pick up the digital copy of the album, and get your funk on.