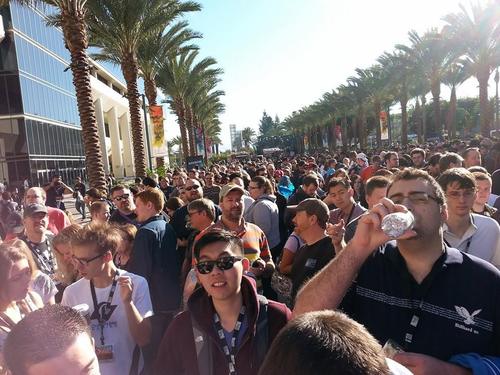 I apologize for the lateness of this recap but I sadly picked up the dreaded Con Plague and have been down for the count the last several days since returning home.

Wow. Literally, WoW. What a crazy couple of days. I will try to recap as much as I can remember. it was pretty intense.

Badges were available for pickup starting at 4pm on Thursday. We spent the morning at Disneyland (which was kinda a mistake to be walking all day) and then headed over to get in line for badge pickup around 3pm and there already was a huge line. It’s hard to describe the layout if you are unfamiliar with it, but basically there is the main floor of the convention center and a lower level where the pickup was. And then outside there is a pathway and then that snakes around a large fountain and goes down about 2 blocks between 2 hotels, down to a main street. When we got there the line was at the fountain, and about 10 minutes after it was down to the main road. We waited about 2 hours to get into the building, and from there you got into a hall, that had lines roped off, going back and forth, for about 12 rows. It was like a giant cattle herd moving through. I even started saying “Mooo” in my husband’s ear. Eventually we got to the counter and got our badges and goody bags and got out of there. We had heard there were people lined up since about 9am that morning, just to get their badge and goody bag.

The next morning the doors weren’t being opened until 10am (I think it was) and opening ceremony was at 11am. We decided to have breakfast at 7am and then head over to the line. We got there about 8:15am and the line was already about 20 people wide and halfway down between the hotels. There were food trucks parked up and down the line, and they were doing good business I’m sure. This time the line seemed to move quicker and eventually we made it into the lobby.

When the doors opened there was a huge surge of people in 2 directions: 1 to the main stage and 1 to the store. We went to the store. That was another line (yes, weekend of lines) and about half an hour before we got to the front. We got some t-shirts, a Murloc plushie (squee!), a Horde towel, Arthas and Illidan Pop vinyl figures, and a poster. We then headed over to the main stage area for opening ceremonies, and got a fairly decent seat off the to side but had a large screen to watch. It was awesome to hear the crowd so pumped, and it was sort of just an overview of what was to come, including the new World of Warcraft expansion, as well as the new free to play Heroes of the Storm. It was really awesome to be live in the room for it and a great way to start the con. They said something like 30,000 people had bought tickets so you can imagine how crowded it was in there.

After the opening ceremony we hung around the main stage area for the panel on World of Warcraft that was a preview of what would be talked about. They announced the expansion, Warlords of Draenor, as well as went over some of the upcoming changes (level 100, boost to 90, garrisons, new zone, new raids and dungeons) and again the crowd was insane. Since this was just an overview we played to head back for the next WoW panel which explained things more in depth.

We wandered around the floor and looked at the computer part vendors, watched some people playing Diablo, grabbed a drink, and headed back for the next WoW panel that was all about Warlords of Draenor. This room was packed again. What I took away from this panel was the following:

– Level 100, and only 1 new talent, but no real new spells, more the ones you have will get buffed as you level
– Boost to 90 where with the expac you can either boost a toon to 90 or start a new level 90, and jump right into new content
– Hit/Expertise/Dodge/Parry gone
– No more reforging, gear will go with your spec
– New character models (less cartoony looking)
– Garrisons, which is like a mini town you own (town hall, inn, etc) and you can add to it and gain followers and they will quest for you and bring you loot, and your friends can visit your town, really a huge part of the expac
– And of course the new zone and lore, Draenor, what Outland was before it blew up, and the layout is similar so it will look familiar, and Hellscream went back in time and is trying to unite the old Orc clans to form the Iron Horde

Basically it was the highlight of the convention for us. So much to take away from it and it was really cool to be there for the announcements of it all, to be some of the first people to know.

After that we headed back to the hotel for a bit to drop off our loot, grab a bit of a bite to eat (con food is crazy expensive) and relax for a little while. We decided to head back to the con a little before the Heroes of Storm panel, so we had some time to look around more. We were a little surprised there weren’t that many vendors, only Jinx and about 3 or 4 computer ones, but it is to be expected since it was more about the games. The areas to play all the games took up the most room. You could wait in line to get your chance to play 15 minutes of the new WoW expac, Starcraft, the new Diablo 3 expac on the PS4 (before it was even out for sale), Hearthstone (the trading card game on the PC or tablet) and Heroes of the Storm (the new free to play game). Some people would stand in line 3 or 4 times to replay.

We settled in for the Heroes of the Storm panel because we were curious about it. Basically, it takes all the heroes (and villains) from all the Blizzard games, and you choose them to make a team. You then fight against other teams. So you can have Arthas, Diablo, and a Demon Hunter on your team, and fight another team made up of others. Teams level up, and if you don’t have people to play with you can have a team of you and AI fight another team. It will be free to play (which is cool) and people were already asking how to get in on the beta for it. It looked pretty cool, but I am still a little unsure about it.

After that we decided to grab better seats in the main hall for the Contests. This was a highlight I was looking forward to. There was the costume contest, band contest, and some art and movie finalists were shown. Jay Mohr hosted (as he does ever year I guess) and he was alright at it, even though there were several mixups. The bands that played were alright, there was a metal band, rap group, rock duo, and a folk duo. The metal band won, even though I thought the rock duo did better. The art finalists were really good, their drawings were shown on the big screens, but movie/video finalists were (and this is my personal opinion) pretty terrible. The singing was horrible, and it was painful to watch any that were live action. The only one I could stand was the animated one which was a morning in the life of Garrosh Hellscream. Honestly, they were not something I enjoyed.

But the costumes were amazing. When we were walking back to the con after our break we saw all the cosplayers lined up in front of the fountain and got some pics. Not all of them were on the contest, but they all were great costumes. In the contest there were some amazing ones with great details, and some hilarious ones. My faves were the horde training dummy (it looked like real wood), the druid in cat form (full fur suit), the Tuskar (full walrus costume), and of course, there was a guy dressed up as He Who Has No Life (from South Park). There was even a proposal from 2 barbarians on stage which was sweet. And the first place winner (a custom wizard costume) won a cash prize and a chance for her to be in a future Blizzard game. One hell of a prize.

With Day 1 done we headed for dinner and had an early night. Day 2 was breakfast around 8am with some other Canadians and line up went quicker this time. We hit up the store again since the line was shorter, and bought a book and WoW monopoly. Then we headed over to watch the live raid, where the top Horde guild and top Alliance guild went  head to head in a race to down the most raid bosses in WoW. The Alliance side got the first boss down quicker, but kept wiping on the 2nd, so the Horde guild pulled ahead and managed to down the last boss with seconds to go before the end of the time limit. It was a great crowd and really exciting to watch. After that we wandered around and watched some Starcraft finals and WoW Arena finals. We than headed to watch the Warcraft movie panel, but it was sort of boring. We wandered around a bit and I saw a bunch of people sitting at the WoW signing table with no line so I jumped at the chance to get them to sign my book. We then ended up heading back to the hotel again for a break. While we were there, I was online on my phone and read on Facebook the Felicia Day (from The Guild, Eureka, Supernatural, and the Geek & Sundry website) would be at the Jinx booth from 2-4pm. We hauled ass back to the con and got in line just in time, because 3 people behind us a dude was given a sign that said “Last Person in Line”. It was awesome to meet her and get my photo with her. I got her to sign a copy of my book, which was started from a post on the G&S website forum (Murloc Soup for the Geek Soul). After that we watched some more WoW Arena Finals, and then watched some Faction Feud (it was like Family Feud, but about Blizzard games) and then it was time to grab a seat for Closing Ceremony. They recapped the overall con, and said thanks. And then we waited for Blink 182 to play. And waited. And waited. And then after an hour of waiting “a few more minutes” we decided it wasn’t worth it (and a lot of others seemed to as well as many left too) and headed for dinner.

Overall it was an amazing crazy weekend. It was a blur a lot of the time but also really great. The vibe was wonderful. With so many people there, and alcohol being served, it was amazing we didn’t see a single fight or argument or anything. The gaming community seems better in person than online! But it was a blast. I would go again, not sure if I would go next year (if I got tickets) but maybe in another year or two. Well worth it.

Line behind us Friday Morning

Line in front of us Friday Morning

Me and Felicia Day