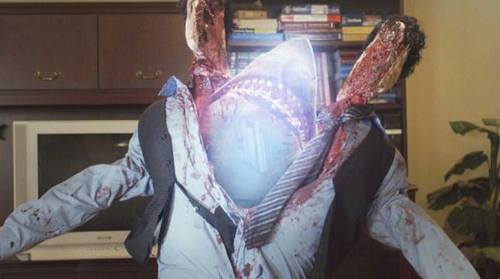 So, Ghost Shark. What can I say. I was excited about it after the epic journey that was SharkNado (which I am going to do a review for).  But it felt like it was not exactly thought out. Not like any B Movie really is I guess.

For some reason the shark avenges his death by attacking random people thru any water source. ANY water source. One guy has a glass of water and gets ripped in half from the inside.

And when some kids are playing on a slip and slide, one kid slides into a real shark.

The shark also pops up in a bucket of water, and some pipes under a sink. Oh and near the end, when it raining, you guessed it, it rains down on people and dives into a puddle.

It was sort of a confusing movie, with typical B Movie plot holes, and just general cheese. It wasn’t completely terrible, but it wasn’t a good B Movie either.

Not having much luck lately with B Movies. Think I need to go back and re-watch some classics.