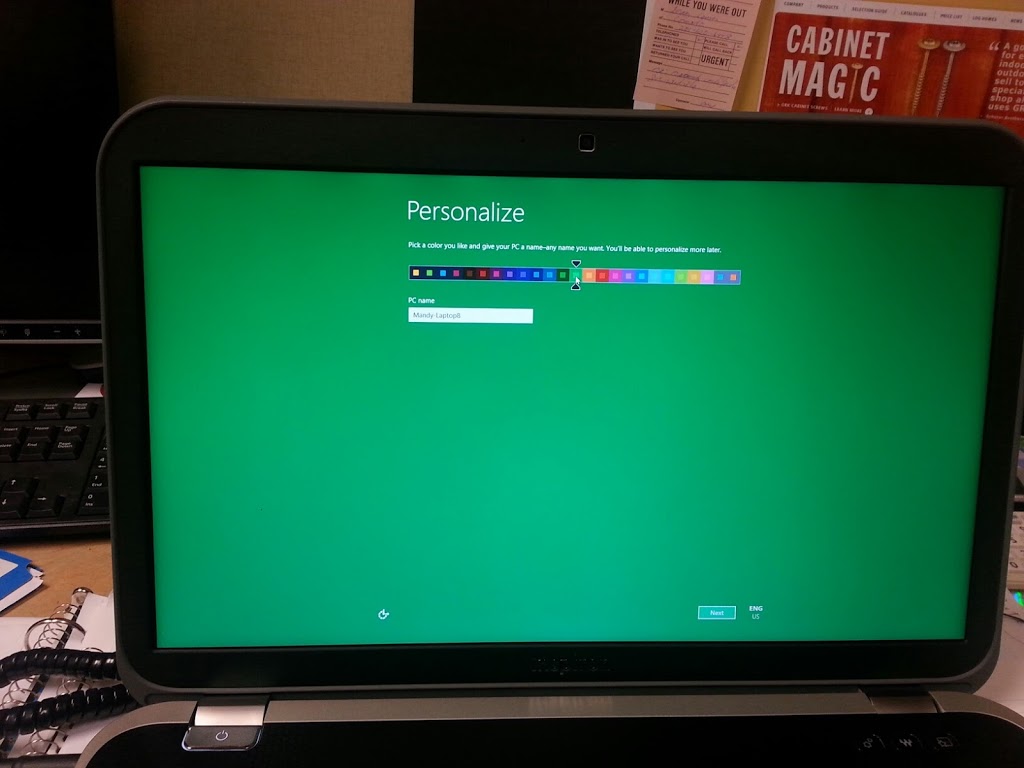 My laptop decided to take a turn for the the worse, it’s 5 years old, so I decided to get a new one. Since I like Dell’s financing I decided to order from them. They were having a sale and had ready to ship options that were prebuilt and ready to go in a day, so I ordered one, unfortunately they only had Windows 8 as an option. I wasn’t too thrilled, but felt it would be a good adventure, so I sat back and waited.

Today I got my laptop, and fired it up to see what this Windows 8 was all about. I had only ever played with it briefly on a tablet with touchscreen, so I wasn’t sure how it would be on a normal laptop.

No Windows icon, but I did get this on the screen. I got to pick what colour I wanted Windows to be. I picked green.

Then I got a screen telling me about the new way to use Windows.

Ok, so nothing major so far. Then BAM! Crazy squares!

Ok, ok. I can handle this. I looked over them to see what all was there. Bing? Yeah, no way I’m using Bing. But it was cool there was already a Skype and eBay square. (Tile? I think they are called tiles).

Ok, desktop, I choose you!

Pretty bare. And if you mouse to the top right a side menu thingy pops out.

The first look at no Start button. Weird. Luckily I found a tweak online before I started, on how I could make my own Start menu of sorts.

Not too pretty but it works. Odd that I can’t make an icon for it though. But it’s better than nothing.

And I found out how to personalize and make the desktop green as well.

And the task manager is a whole new layout out as well, and will take a bit to get used to.

All the pop up windows have a flat look to them now.

Oh and I found the scary screen of squares!!

My overall first impressions of Windows 8 are that you have to go into it like it’s a whole new operationg system and not compare it to any previous versions. It is clear it was made for mobile devices (you can download apps? Odd) with the temptation to touch the squares (I want to touch them!). But once you sorta get used to it, it’s not too terrible. I can see the use of the new Start screen. I will probably use it as shortcuts for games or things like eBay. I will probably use the desktop for organizing files.

I don’t really hate it. But then again I never had ANY issue with Vista, and I think I was the only one. And at the very least the only IT person I knew who didn’t hate it.

Windows 8 isn’t really too different, you just have to look at it as a new experience. A new adventure.